Some of the RPM-based distributions are Red Hat, Fedora, Fermi Linux, CentOS, SUSE Enterprise, openSUSE, and Mandriva. RPM is a package managment system used to build, install, verify, update, and uninstall software in these distributions. This can be done using the rpm command, along with options that specify the action you would like to perform.

Some common options used with the rpm command are:

The convention for naming RPM packages is: packagename-a.b.c-x.arch.rpm. Each part of the package name has a meaning:

To install a package using the rpm command, type rpm followed by the -i option and the name of the package you would like to install. For example, to install kdessh, we would use the following command:

Note that we have used the -v option to get more detailed information.

Getting information about packages using rmp

To determine the version and release information for software packages, you can use the rpm command with the -q option:

To get even more information, use the -qi options: 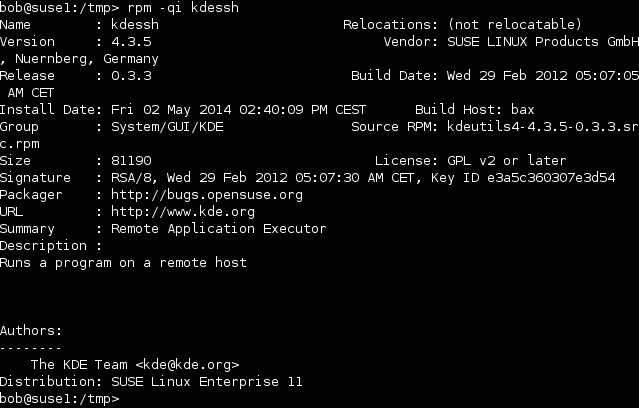 To uninstall software packages using rpm, use the -e option:

rpm does not install dependencies. Some higher level tools (like yum) are used for dependency management.