By default, a video player called omxplayer is installed in Raspbian. It is a simple command-line application designed to take advantage of the Raspberry Pi’s GPU (Graphics Processor Unit). To start watching a video, you just need to specify the path to the video file at the command line and the video will start in full screen.

The video should start in full screen. To enable the sound output on the HDMI port, use the -o hdmi option:

You can issue various command while a video is playing by using the following keys: 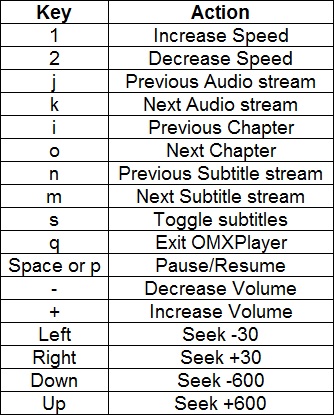 With omxplayer, you don’t even need to enter the GUI to play videos; you can watch videos even if Raspbian boots into the command line.