A standard switch (sometimes called vSwitch) is created by default when ESXi is installed. Like its physical Ethernet counterpart, a standard switch works at layer 2, forwards frames to other switch ports based on the MAC address, and supports features such as VLANs and port channels. Standard switches have to be connected to the ESXi host’s physical NICs as uplinks to communicate with the rest of the network. They are configured at the host level, meaning that you must create and manage vSphere Standard Switches independently on each ESXi host.

A standard switch has the ability to move layer 2 traffic between virtual machines internally. This means that two virtual machines on the same subnet and on the same ESXi host can communicate directly; the traffic does not need to leave the ESXi host. Standard switces also support some advanced networking features, such as outbound traffic shaping, NIC teaming, different security policies, Cisco Discovery Protocol (CDP) support, etc. You can have a total of 4096 standard switch ports per host, a maximum of 1016 active ports per host, and 512 port groups per switch.

In the picture below you can see a graphical representation of a standard switch in vSphere Web Client. Notice the different port groups for the virtual machines network and VMkernel: 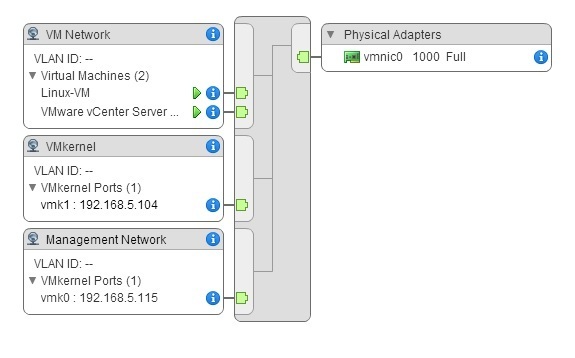