Shares in vSphere specify the relative priority of a VM’s access to a given resource (such as CPU, memory, or storage). If an ESXi host comes under contention and must decide which VM gets access to which resources, VMs with higher shares assigned will have higher priority, and therefore greater access, to the ESXi host’s resources.

Note that the share mechanism operates only when VMs are contenting for the same resource. If an ESXi host has plenty of the resource available, shares will not play a role. However, when the resource is scarce and ESXi must decide which VMs should be given access to it, shares can establish a proportional share system. For example, if two VMs want more of the resource than their reservation limit and the ESXi host can’t satisfy both of them, the VM with the greater share value will get higher-priority access to the resource in the ESXi host than the other. 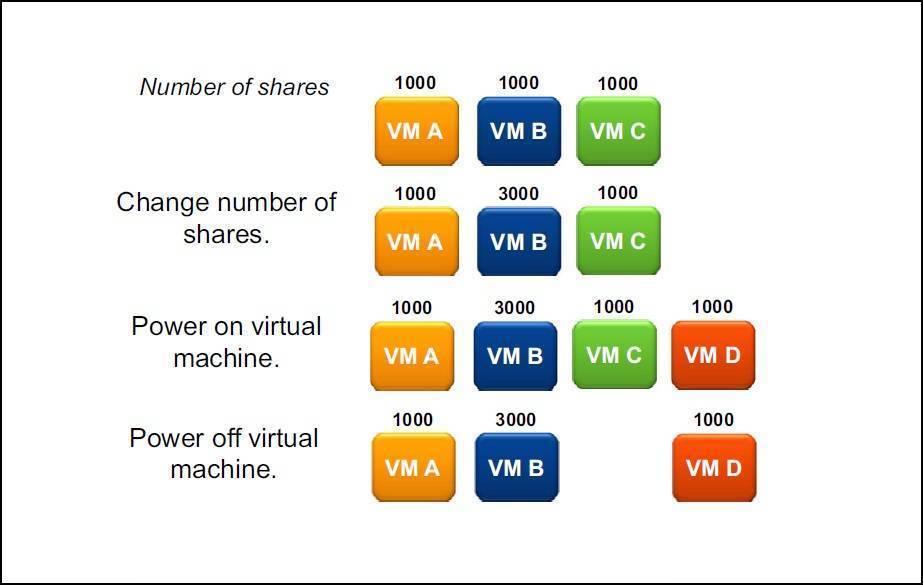 In the second row you can see that the number of the shares has been changed. Now, the total number of shares is 5000. Notice that VM B has more shares (3000) than the other two VMs (1000). In the case of contention, VM B will receive 60% of the resource from the ESXi host.

In the fourth row you can see that VM C has been deleted. Since fewer total shares remain, the surviving VMs will receive more quantity of the resource.