You can download applications for your Raspberry Pi from the Raspbian repository. This repository, available at http://archive.raspbian.org, can be used with the apt command to install thousands of additional applications on your device. You can install web browsers, text editors, games, web servers, etc. Since Raspbian is Debian-based, a huge number of Debian applications have been ported to Raspbian – more than 35,000 packages (applications) are available in the repository!

To install an application from the repository, a package manager called Advanced Packaging Tool (APT) can be used. Two of the most commonly used tools included with this program are: 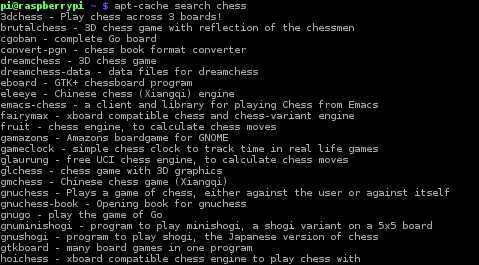 We got a huge list of packages with the word chess in their name or description. One of the packages found is called dreamchess. To get additional information about that package, we can use the apt-cache show dreamchess command: 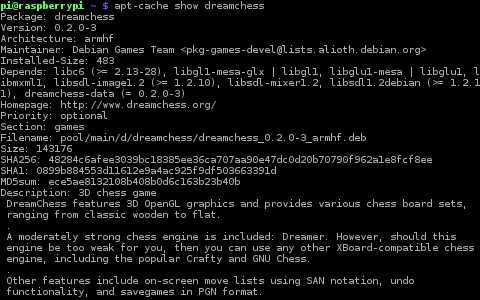 The apt-cache show dreamchess command show us a lot of useful information about the package, such as the current version, architecture, homepage, size, and a brief description.

Now that we’ve found the application, we can install it using the sudo apt-get install dreamchess command: 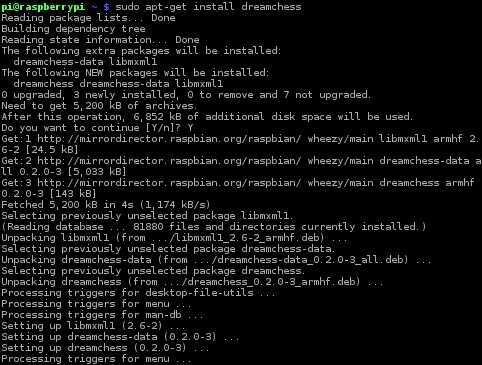 The sudo command allowed us to run the command as root. The apt-get command must be preceded with the sudo keyword.

The apt-get tool can also be used to remove installed packages. The syntax of the command is sudo apt-get remove PACKAGE NAME. For example. to remove an application we’ve installed previously, we would run the following command: