What is a network hub?

A network hub serves as a connection point for all devices in a LAN. It is basically a multiple-port repeater because it repeats an electrical signal that comes in one port out all other ports (except the incoming port). Here is an example 4-port Ethernet hub (source: Wikipedia): 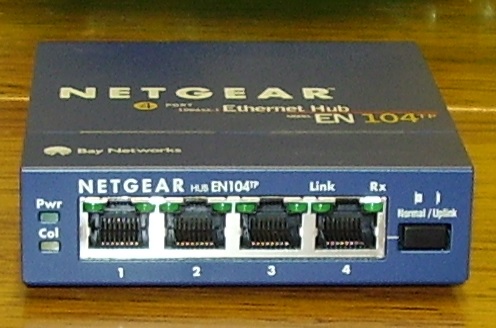 Hubs are OSI Layer 1 devices and have no concept of Ethernet frames or addressing. They have no way of distinguishing which port a signal should be sent to; instead, an electrical signal is broadcast to every port. All nodes on the network will receive data, and the data will eventually reach the correct destination, but with a lot of unnecessary network traffic:

In the picture above you can see that the hub has sent out the receiving signal out all other ports, except the incoming port.

Modern LANs rarely use hubs; switches are used instead. Hubs have many disadvantages, including: