The TCP/IP model is the network model used by computer networks today. It was created in the 1970s by DARPA (Defense Advance Research Project Agency) as an open, vendor-neutral, public networking model. Just like the OSI reference model, the TCP/IP model provides general guidelines for designing and implementing network protocols.

The TCP/IP model has fewer layers than the OSI model, just four. These layers describe different network functions and have their own standards and protocols. The layers are:

Here is a brief description of each layer:

Differences between the TCP/IP model and OSI model

The TCP/IP model and the OSI model are similar in concept, but have a different number of layers, sometimes with different names: 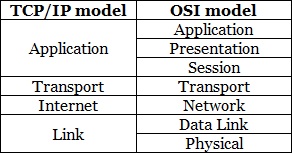 The following list shows which protocols reside on which layer: