A short introduction to… Nmap

Nmap is a robust network security tool written by Gordon Lyon. It was released more than 20 years ago and has since become the de facto standard for network mapping and port scanning. Nmap helps network administrators around the world to discover hosts and services on a computer network and build a map of their network.

Nmap was originally developed for Linux, but it has been ported to most major operating systems, such as Microsoft Windows, HP-UX, Solaris,, etc. Released under the GPL license, Nmap is free to use, study, and modify.

Although usually used for port scanning and network mapping, Nmap can also be used for other purposes, such as:

Some Linux distributions (e.g. Kali Linux) include Nmap by default. To verify whether Nmap is already installed on your system, run the nmap –version command. If the software exists, you should get the following output:

If you are using Debian or some other Debian-based Linux distribution, install Nmap by running the sudo apt-get install nmap command.

Although Nmap is officially supported on Windows 7 and newer, the Windows version is not quite as efficient as the Linux version. There exist some major limitations and drawbacks. However, if you are unfamiliar with Linux and want to run Nmap in a Windows environment, you can download the Windows installer here: https://nmap.org/download.html.

Let’s run our first Nmap scan. The official Nmap website offers a target host at scanme.nmap.org that can be scanned as an example. To scan this machine with all the default parameters, simply run the nmap scanme.nmap.org command:

You can probably figure out the output above – three TCP ports are open. The line 22/tcp open ssh indicates that the TCP port 22 is open, and that the ssh service is probably running on that port.

The scan above works only if your system has Internet access. Of course, you can also scan local hosts. Here is an example:

You can also use Nmap to determine the version of the software that the target host is running. This can be particularly useful when doing vulnerability assessments, since you really want to know, for example, which web or DNS servers and versions are running on the host, and having the accurate versions helps dramatically in determining which exploits a server is vulnerable to.

You can determine various interesting information using service scans, including:

To run a service version scan, we use the -sV flags:

Notice how I got more information about services running on the open ports, including their versions.

By default, Nmap scans the most common 1,000 ports for each protocol. However, since there are 65535 ports that can be used for service, sometimes you might want to scan very high ports or even individual ports. To do this, the -p flag is used.

Here is a simple example. To scan only the port 135, we can use the following command:

You can also scan a range of ports. This can be done by using the hyphen (-) to specify the range. For example to scan only ports 80 to 90, we would use the following command:

Zenmap is a free and open source GUI for Nmap that makes Nmap easier to use for beginners. This software is usually packaged with Nmap itself and is available on many operating systems (Linux, Windows, Mac OS X, BSD, etc.). Some of its features are:

Most of the options and fields in Zenmap are pretty straightforward. You simply type the target’s IP address of hostname in the Target field, choose the scan type from the Profile field, and click the Scan button to start the scan. For example, here is how we would run a quick scan against the host with the IP address of 192.168.5.102: 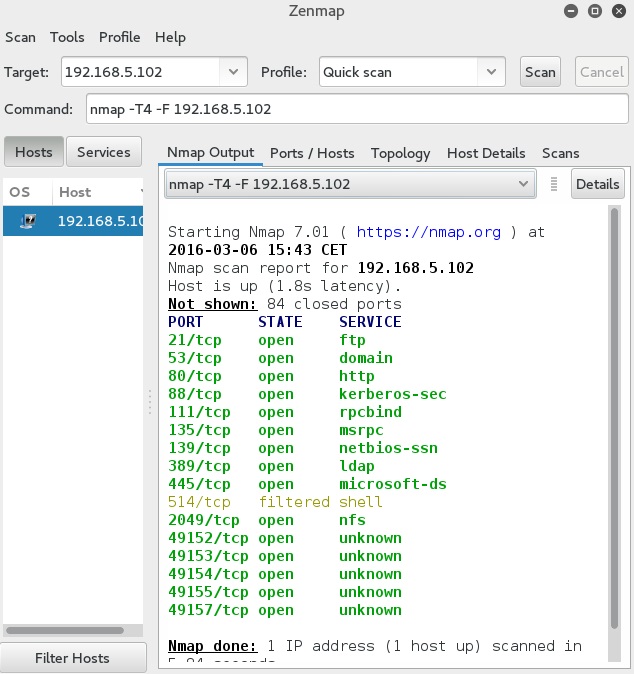 This introduction is also available in PDF format: